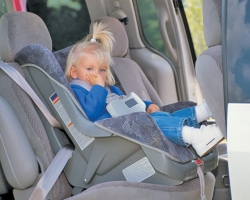 A Seal Beach Police officer recently responded to a report of two small children being left in a car parked on Pacific Coast Highway, at 7:50 p.m., in late April.

The officer first checked on the children. They were sleeping in their car seats and did not appear to be in distress.

Police officers have the discretion to counsel individuals rather than cite them, according to Seal Beach Police Cpl. Michael Henderson.

He explained that the issue when an officer finds children unattended in a car is whether the children are at risk—such as being in a car on a hot day—and whether the engine is running or the keys are in the ignition.

Henderson said that an officer in the field would not have access to information about whether the citation was being issued for the first time.

Had the officer decided to issue the citizen a citation, California Vehicle Code 15620 imposes a $100 fine for leaving a child 6 years old or younger unattended in a car. If the child is attended, the other person in the vehicle must be at least 12 years old. 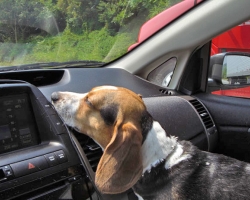 The law grants the court the discretion to waive the $100 fine in favor of community service if the person who is cited is able to demonstrate that paying the fine would be a financial burden on the adult. The law does not provide escalating fines for multiple offenses. However, the law allows the prosecution of an adult for child endangerment as a result of leaving a child unattended in a car.

Leaving an animal in a car is a slightly different  matter. California Penal Code 597.7 imposes the same fine on the first offense  as leaving a child in a car: $100 if the animal is not harmed.

After that, the state criminal code imposes a $500 fine, a sentence of six months in jail or both, on anyone convicted of leaving an animal unattended in a car.

It doesn’t matter, under the Penal Code, if the animal wasn’t harmed on any of the subsequent occasions.

As in the case of a child left in a car, Cpl. Henderson said an officer in the field would not know if the person being cited was a first-offender or a repeat offender.

Henderson said that whether the issue is an animal or a human child being left in a car, the issue of previous offenses would come up when the case came to court.

According to the National Highway Traffic Safety Administration, “Data from the San Francisco State University Department of Geosciences show that since 1998, there have been 637 deaths in the United States resulting from adults leaving a young child in a vehicle. In 2014, 30 lives were lost and one death has already occurred this year.”