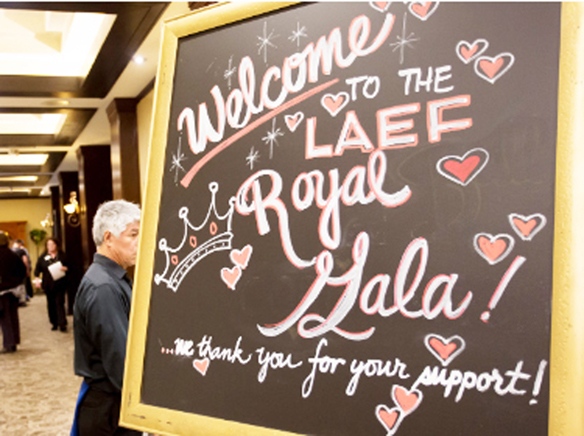 For the first time in two years, supporters of the Los Alamitos Unified School District crowded in-person into the Grand Hotel in Long Beach for its annual “LAEF Royal Gala,” this year attempting to raise $150,000 to build a new high school Well Space to support the growing problem of mental health.

“As we know, things have gotten worse for student mental health during COVID,” said Carrie Logue, the Executive Director of the Los Alamitos Education Foundation (LAEF), the sponsor of the event.

She said according to the CDC and related agencies, suicide attempts among adolescents jumped 31 percent during the pandemic. So much so, that student mental health issues are now considered a “national emergency.”

Logue praised the long history of the LAEF organization, asking many of the 45 former Kings and Queens in the audience to raise their hands for recognition. In addition, Logue introduced many of the sponsoring organizations who she said consistently step up for students in the district.

Logue said LAEF has already donated $60,000 to the district, in cooperation with Children’s Hospital of Orange County, the OC Department of Education and LAUSD to construct two mental health Well Spaces on both of the district’s two middle school campuses.

“They (teachers) say okay, take a break, go somewhere safe and feel better,” she said. “There are a lot of other (administrative and mental health) professionals working in these spaces to support these kids.”

In fact, she listed a number of credentialed children’s organizations who declared the acceleration of mental health issues among students during the pandemic “has become a national emergency.” Logue said she and her fourth-grade daughter were affected so no one is immune.

Her daughter suffered separation anxiety so profound that “she couldn’t go to bed alone nor take a shower by herself so it’s a real thing.”

Logue said Los Al High School has more than 3,000 kids attending and desperately needs a Well Space. She said administrators at LAHS has found a location large enough for a space to include rest areas, counseling offices and eventually, even a garden and an outdoor space for teenagers seeking a safe place on campus.

The pricetag to rebuild the space is $150,000 she said, calling it however, “a big investment in our future.”

Logue introduced Dr. Andrew Pulver, who welcomed and thanked all of the people there to support the foundation, praising Logue and the tremendous support they provide to the district.

“Every donation makes a difference,” he said.

During the festivities, Pulver introduced former king Dr. Gregg Stone, the outgoing titular king of the organization for 2021, telling them about the sudden resignation of an LAHS principal at the height of the COVID crisis and how Dr. Stone, a former LAHS principal, selflessly made a decision to come out of retirement to act as principal.

“He put his own spin on it,” said Pulver, sending an email out to families each week with inspirational thoughts, ending them with the phrase “Be Well” and “Stay Positive.” Pulver said those thoughts are now the title of a book containing those uplifting words and proceeds from the sale of the book are all being donated to LAEF to provide scholarships for students.

Pulver then introduced a video that profiled “an amazing man,” Dave Appling, the new LAEF King for 2022.  During the video, people with whom Appling has worked for the past four decades gave their account of what Appling has done for the community.

Appling has raised funds for data and technology, school projects other projects. “He’s been a force in this community ever since he and his wife moved into this community 40 or 50 years ago, said one associate.

In 1995, Dave launched a fundraising campaign in partnership with then-Superintendent Mike Miller, LAHS Assistant Principal Ralph Opacic and 31 community leaders to raise $1.5 million for technology improvements across the district. It took three years, but they successfully raised $750,000 in parent and local business support, which was matched by the state to meet the fundraising goal.

In the mid 2000’s, Dave took on a second successful fundraising campaign, in partnership with LAHS principals, to raise $300,000 to support technology across the LAHS campus, including the new two-story building.

Appling introduced his family and briefly said “as many of you know, Los Alamitos Education Foundation is near and dear to my heart.”

He retold the story about how a former Supt., Mike Miller, asked him and others to help raise $1.5 million to bring the technology of the district up to the level of others during the tech boom two and three decades ago.

“With the help of a lot of people, we did it,” he said, including several people in the room whom, he asked to briefly stand and share the limelight.

He also praised the current organizational leader Tom Lent, CEO of Southland Credit and Logue, the organization’s Executive Director. “They’re setting all kinds of records this year,” he said.

“Thank you very much,” he said, “I just have to say that I am so very proud to be a small part of this organization.”

Pulver and Logue then opened the live auction as bidding began and raised approximately $85,000 during the evening. Logue said the online silent auction would be active until the end of the month, so anyone wanting to contribute to support the new LAHS Well Space can do so at www.laef4kids.org or visit the silent auction site at https://events.charityauctionstoday.com/auctions/laef-29766.