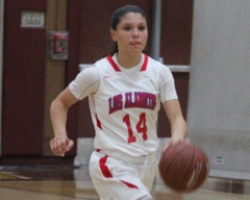 Los Alamitos High’s girls basketball team has opened the Sunset League with a 3-0 record. The Griffins defeated Fountain Valley, Edison and Marina. The Griffins topped Marina on Thursday, 74-29, led by sophomore Sydney Gandy with 28 points and 13 points from Kalei Iwami.

The Griffins played a key game on Tuesday (Jan. 16) at home against Huntington Beach, which also opened the season with a 3-0 record. The Griffins will be at Newport Harbor on Thursday, Jan. 18, at 7 p.m. and will be at Fountain Valley on Monday, Jan. 22, also for a 7 p.m. game.

After opening Sunset League with a 0-0 tie against Newport Harbor, the Los Alamitos High girls soccer team has reeled off three wins in a row. The Griffins defeated Marina, 2-1, with a goal in the final minutes to improve to 3-0-1 in league play.

The Griffins will play at Newport Harbor on Thursday, Jan. 18, at 3 p.m. and then at Fountain Valley on Monday, also at 3 p.m.