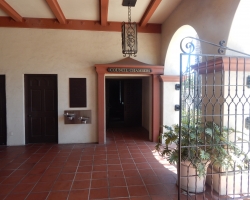 The Seal Beach City Council will hold a public hearing on two appeals of the LA Fitness project on Monday, Sept. 11.

Technically, the council will be looking at separate appeals from opposing sides of the project.

Rebecca Lynn Allie, an opponent of the project, is appealing the Planning Commission’s decision to certify the Final Environmental Impact Report for the project.

LA Fitness wants to put a 27,000 square foot health club in the Shops at Rossmoor in Seal Beach, behind the Sprouts market. The Planning Commission approved the permit for the proposed project last year, but opponents appealed that decision to the City Council. In July 2016, following hours of testimony before a packed chamber, the City Council voted 3-2 to uphold the appeal—which meant the city would not issue a permit for the club. (Two of the council members who voted against the project termed out of office last year.)

But because city staff had not prepared a resolution upholding the appeal, the council had to vote on a resolution upholding the appeal at the first August 2016 meeting to make the decision legally binding. The project developers withdrew their application between the July and August 2016 meetings. The developers re-submitted the LA Fitness project earlier this year.

History repeated itself in June 2017, when the Planning Commission concluded a lengthy public hearing by voting to deny this year’s permit application. Staff had prepared a resolution to approve the permit, but not one to deny it, so the commission had to formally vote again on the permit in mid-July.

Opponents of the project include residents who live in the surrounding area: the unincorporated community of Rossmoor, the nearby boundary of Los Alamitos and College Park East. (Some opponents live in Old Town.) Opponents have raised concerns about the club’s potential impact on traffic and pedestrian safety as well as the potential to increase crime in the neighborhood.

Supporters have argued that the proposed gym would be conveniently located near Leisure World, would make improvements to Seal Beach Boulevard along Rossmoor Center Way and bring business revenue to the city.