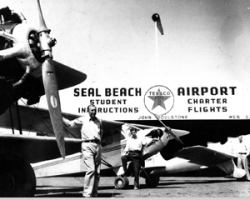 Don Stegen, a second generation Seal Beacher described the airport that once operated in Seal Beach. The airport was first called “Crawford Field,” named for Mr. Crawford who built gliders there in the ’20s. Later in the ’30s it was called the “Seal Beach Airport.” Clyde Schlipper and Wes Carroll were among a few of the pilots.  They flew a Piper Cub Sea Plane non-stop for 30 days, a world record endurance flight.

It was called the “Spirit of Kay” because Kay Jewelers of Long Beach sponsored them.  They took off from Marine Stadium and flew over Seal Beach, then out to the desert and circled back again and again. The plane was refueled with a unique system—a man in a roadster would drive along the runway with 5 gallon cans of gasoline.

The men in the plane would drop a line with a hook on it and pull the cans up into the plane.  This was also how their food was delivered.

The Glide’er Inn (now known as the restaurant Mahé), which was located across Pacific Coast Highway from the airport, provided  meals and snacks in wicker baskets.

Another second generation Seal Beacher, Jim Templeton used to hang around the airport, cleaning planes, talking to the pilots and mechanics, sometimes even receiving free rides. On one ride, the plane developed engine trouble and landed in the field across from Zoeter School—Jim hopped out ran across PCH, and was late to school.

Don had his first plane ride, from this airport, sitting on his mother’s lap, when he was about 4 or 5 years old. HH

When the Seal Beach Weapons Station came in 1944 the Seal Beach Airport Administration building was moved to the corner of 8th and Central, across from the Seal Beach City Hall where it became the Ration Board during the war.  After that, it became the Red Cross and at the time her grandmother, Jessie Reed, was on the city council she purchased the building and moved it to 316 ? 10th Street.  Her grandfather remodeled the house where she lived from the time she was seven years old until she married.  Her mother inherited the house and lived there until she passed away.

At the time it was at theSeal Beach Airport, it had a big letter “R” on the front of the building.  It became the Ration Board then the Red Cross building,  her grandparents name was Reed.  So they decided that “R” stood for all those uses.

It remains on 10th Street to this day where her son, his wife and her grandchild stay where five generations of Reeds have lived.  Her great grandmother lived in Anaheim Landing and with a granddaughter living in Seal Beach, that makes six generations in Seal Beach.

One of the small buildings on the lot is from the Tent City that covered a whole block on Ocean Ave. between 12th and 14th  Street from 1918 – 1938, three years after Seal Beach became incorporated in 1915.

If you hgave history stories of Seal Beach or memories to share of the city as it prepares to celebrate it’s 95th year, send by e-mail; to dennis@sunnews.org.

The Taste of Seal Beach Program is Up and Running!

The 2010 “Taste of Seal Beach” program is on its way and cards are selling now.  The Founders Day Committee launched their version of “Taste Of” during our 90th celebration in 2005.  The program was such a success that we decided to run it again, and with the help of sixteen wonderful participants this year, we have a great program to offer.

So, what is it, exactly? Instead of the traditional one-day on site tasting that is usually associated with most “Taste Of” programs, our program is a Card that you purchase that will be good for the month of October, and offers dining discounts at some of the best loved places in town.

The cards are available for $20.00 each. Each card is a one-time per offer use, and there are sixteen offers on the card.  The cards can be used in conjunction with Founders Day month, October 1 – 31, 2010 at any of the participating restaurants.  The user will receive a list of all offers as a part of the card purchase.   Card value if all offers are redeemed exceeds $160.00 to the user.

The Taste of Seal Beach program is a win for everyone.  It provides an excellent value to the buyer, for one.  It will help drive new business to the participating restaurants during October, which is traditionally one of the slowest months of the year for business, and last, it supports the 95th Founders Day committee in its fundraising efforts.  All net proceeds from the sales of the cards and other programs will go back to the City of Seal Beach Recreation Department as a gift for future recreation programs.

The Founders Day Committee will only sell 500 cards, so get yours early or you will be left out of the program.  Cards can be purchased at the City of Seal Beach Recreation Department, Chamber of Commerce Office, and at our Founders Day Sales Tent every Saturday and some Sundays from 9-1 at the Pier.  You can also contact us at TasteofSealBeach@hotmail.com.