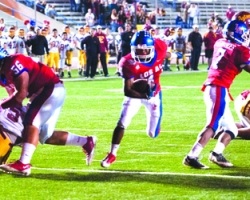 Los Alamitos Griffins football team barely held on to its hopes for a position in the CIF playoffs as it won by two points over Esperanza.

Los Alamitos High School’s Griffin Varsity Football Team almost gave the Esperanza Aztecs a come from behind tie and faced the possibility of losing a shot at a spot in the CIF play-off games.

With a 21 to 13 lead in the final one minute and 35 seconds of play in the game, Los Alamitos’ Twin Fernandez’ running attempt at a 5-yard touchdown, that would have given Los Al a 15-point lead, turned into a nightmare.

The ball popped out of Twin’s arms into an Esperanza Aztec linebacker’s arms, who ran a few yards, then flipped the ball to his faster teammate, who then galloped for a 95-yard touchdown.

In the media box, reporters were finishing their stories, and camera operators had been packing up, when this happened.

It turned into a chaotic discussion of: who fumbled? Who recovered the fumble? Who tossed the ball? And who scored the touchdown?

However, there was even more chaos on the field sidelines as Coach John Barnes of Los Alamitos quickly organized a defense for the upcoming two-point conversion that would tie the game and send it into overtime.

Esperanza’s sidelines were even more in chaos with the celebrations at the touchdown and the Esperanza coaches trying to organize the extra two-point try.

Even the Los Alamitos Cheer leaders were confused as they were counting the points on their fingers before the scoreboard could be adjusted to the correct score. The attempted scramble pass for the two points was intercepted by the ever-present # 22 Robert Watson, giving Los Alamitos a 21-19 win.

On the ensuing onside kick attempt by Esperanza, the Griffin’s # 31 Joe Locher’s sure hands recovered the ball, giving time for Los Al to run out the clock for a 21 to 19 Los Alamitos win.

Los Alamitos started the game kicking the ball off to Esperanza. The Griffin’s  # 22 Robert Watson made the first tackle of the night with a smack that seemed to show Los Alamitos was ready for some football after losing last week to Huntington Beach’s Edison High School team.

Esperanza used a very effective wishbone option type offense with some inside reverses with success. The three-man front of Los Alamitos needed help from the linebackers too often. Michael Collins # 33 played some terrific defense and led in first contact tackles. Esperanza moved the ball down well and scored six points, kicking the extra point for a 7-0 lead over Los Al. With Los Al now on offense it turned into the Josh Gasser # 18 catch and run show with a cast of excellent blocking by the offensive line and # 3 Dylan Lagarde passing with effective precision.

Josh Gasser final catch of the opening series turned into a 20-yard scramble to the goal line for a touchdown. Daniel Boyer extra point tied the game at 7-7.

Esperanza continued to confuse the Los Alamitos defense with their option offense and marched down the field. Los Alamitos # 8 Aaron Davis open field tackles where excellent in times of open field running by Esperanza. Aaron Davis continued with a great sack of the Esperanza quarterback ending their offensive drive.  Brandon Kent also had a key sac of the quarterback.

Twin Fernandez # 7 played excellent defensive end throughout the entire game keeping Esperanza to only two first downs in the first half.  Esperanza did connect with a 3-point field goal after being stopped by the Los Al defense.

One of the highlights of the game came when Josh Barrut # 20, faked a punt and ran for a needed first down. Esperanza continued to put up a very good defense and held Nick Richardson to 30 yards in the first half. Los Alamitos Dylan Legarde pass was intercepted and this ended a good drive to the goal for Los Alamitos. The half-time score. Esperanza 10 to 7 over Los Alamitos.

The Los Alamitos 103-member strong marching band was finally back for a half time show. The, ever present and excellent performing Color Guard Girls started the music fest at half time with their heart beating gathering and pulsating act at the center of the field.

Back to the bands performance. It was certainly drummer Ryan McKay, a senior who was the band player of the week. Banging on a set of four lap drums, keeping rhythm, and not knocking down the color banner girls was certainly a feat.

Additional Honor Band Mention must go to the Mule train of five xylophone players, for pushing their instruments onto and off the field. This week the five members who play the xylophones brought out a rich deep blend of added music to the band in two of their songs.

Cheerleaders of the week goes to senior Brenda Amel for her ever-present smile and sprit, that is so apparent at these games.

Los Alamitos received the ball in the second half and continued its offensive series but ended with a punt. A see saw series began with Esperenza facing an adjusted five man defensive line.

This change from a three-man defensive line began to control the wishbone option of the Aztecs offense. Great tackles by # 7 Twin Fernandez, key pass break-ups by # 22 Robert Watson stymied the Aztecs into a 36 yard field goal for 3-points.

This gave the Aztecs a 13-7 lead with 4:26 left in the game. What Los Alamitos needed was a momentums’ break.  Nick Richardson # 4, held to less than 30 yards in the first half, broke a sprint run for 76 yards to the four-yard goal line. On this play pulling guard # 56 “Freight Train”, Niu Sale blasted an opening hole for Nick Richardson. Nick Richardson followed up with a 4-yard touchdown run.  With the kick by Boyer, Los Alamitos, lead 14 to 13 Aztecs.

In the following defensive series # 8, Aaron Davis must have read the book on, “Defense of the Aztecs”, at half time. Aaron Davis made continuous first tackles on several play with a force that was wrecking to the Aztecs offense.  Brandon Kent, # 70 must be added to this list as his tall presents in rushing made it hard for the Aztecs QB to see his receivers. Which were covered well by Shaquille Richardson # 2, who had a key pass interception?

With Nick Richardson making some key rushing yardage (200 yards in the second half), it was time for Twin Fernandez to break off a 42 yard run that put the Griffins in good field position. A pass from # 3 Dylan Legarde to # 2 Shaquille Richardson made a great catch and then tumbling down to the six inch goal line.

Twin Fernandez # 7 skydived into the end zone and with Daniel Boyers kick; Los Alamitos lead 20 to 13. Good defense and repeat in action by the offense brought the ending of the game with the fumble; touchdown by the Aztecs and blocking of the extra point as described in the first part of this column. This now gives Los Alamitos a record 2-2 in League. With Edison, beating Fountain Valley last week. Fountain Valley is now 2-1 in league.  Next week’s game against FV will be a critical game for Los Alamitos to get into the CIF play-offs.

Who kicked a 60 yard field goal for Los Alamitos and still holds the CIF record?

Please email your answer to dutchsemisports@yahoo.com

Off-the-record. “DENNIS THE FOLLOWING NOTICE SHOULD GO ON THE FRONT” or top of this PAGE. As the Long Beach Police department was in full strength at the game played at Long Beach Vet. Stadium Friday night. They were pulling over every car filled with students who drove into the parking lot during the game. (They should have been inside watching the game.) This is due to the Killing of a LB Wilson student and wounding of two others (who might have been gang members themselves) at the LB Wilson-Poly High School game two Friday nights ago.

The Long Beach Police will continue its strong presents at next week’ game at Long Beach Veterans Stadium. This is due to the shooting death of a Long Beach Wilson Student and the wounding of two others after a high school football game. Please drive into the stadium parking area, park your car, and enter into the Stadium for the game. The Long Beach Police are only serving to protect the students and parents. Thank you and remember to buckle up.