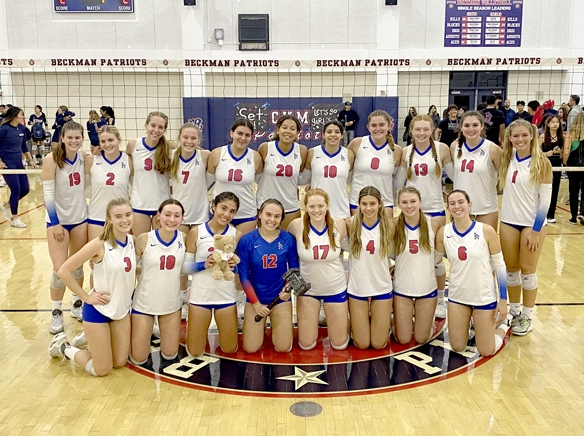 The Los Alamitos girl’s volleyball team won in exciting fashion against Beckman High on Saturday evening in Irvine. It was the second round of the Division 2 CIF Southern Section girls volleyball championship.

The Beckman High Patriots were no small feat for the Griffins. The Irvine-based team was on a nine-game win streak prior to Saturday’s game, losing only one set during that entire run. The Patriots met Los Al in the round 2 match-up after going undefeated (8-0) in the Pacific Coast League and 23-10 overall, earning a bye for the first round of the playoffs. However, the Griffins did not let Beckman’s successes during the regular season distract them from leveling up to the quarter finals.

The Griffins have had quite the season as well, going 25-14 overall and 3-3 in the Sunset Surf League this fall. In September the girls went undefeated for 14 sets (seven games) to earn themselves the 27th Annual Whittier Classic title. Then, after a comfortable 3-0 victory in the first round of the playoffs against Bishop Montgomery High, the Griffins earned their spot in round 2 against Beckman.

With some powerful hits and great defensive plays, the round 2 match-up quickly started on a high note for Los Al. They won the first set with a certain encouraging confidence that had their fans feeling optimistic. The tables turned just as quickly, however, and Beckman was in the game after winning a back-and-forth second set that could have gone either way.

In the following set, Los Al Juniors Kaia Herweg, and Anna Sanzaro, and Sophomore Ashley Repetti combined for a series of cheeky lobs and powerful spikes to keep the momentum charging in their favor. Also, Junior Elon Milroy stepped in with some very important moments. Early on, she slotted a hard-hitting shot to the back, right corner and later closed out the set by poking the ball over the net, beyond the reach of several of Beckman’s players. But, yet again, Beckman put the 4th set out of reach as the two teams alternated wins leading up to the 5th and final set.

Repetti opened the scoring with a cross-net hit that allowed the Griffins to gain momentum early.

To help maintain the lead, Junior Noalani Nuez and Senior libero Kylie Jenkins kept Beckman from notching points on several occasions with some acrobatic defensive efforts. Although, toward the end of the set, Beckman began closing the gap but never gained the lead. With Los Al up 14-13, one point away from victory, the ball hovered over the net with Herweg underneath to slam it home, but her hit went just wide of the mark. Then, a couple of points later, with the score at 15-14, an identical situation materialized as the ball found itself with Herweg yet again.

This time she made no mistake and closed out the game for Los Al.

With this win over Beckman, the Griffins are now set to take on Redondo Union High on Wednesday at Los Alamitos High. Redondo, 27-11 overall and 4-4 in the Bay League, should make for an interesting quarterfinal opponent.

The quarterfinal match against Redondo Union took place on Wednesday night, past the Sun press deadline.

Editor’s Note: Los Alamitos was eliminated from the playoffs by top-seeded Redondo Union on Wednesday.