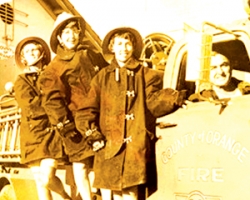 In November 1949, the Sunset Beach charitable organization known as Las Damas held the first Fireman’s Ball, one year after the club formed, to help support the community’s volunteer fire department.

Last year, the group held its 63rd ball and what some thought would be the last since the county of Orange had dissolved the seaside community’s volunteer firefighters.

The community rallied, however, and raised more than $200,000 from its ranks and purchased the firehouse from the county to expand its community center facilities. The plan is to renovate the building so that it is more user friendly for community functions. The effort will cost money and time. Thus was born a reason to resurrect the ball, with a slight name change to the Firehouse Ball.

Now the club, with a short window of opportunity to produce the event, needed someone to run the show. Fortunately, Surfside resident Chimene Armstrong, on the heels of producing a Halloween costume party with her husband, local musician Robby Armstrong, for the charity Children Today, that supports the children of homeless people in the Long Beach area, had recently joined Las Damas. They asked her to take the reins of the Firehouse Ball.

“Kathy Hammond of Las Damas told me she did not want the ball cancelled after 63 years and asked what can we do to keep this going?” Chimene Armstrong said.

“We told them there is no way we would let this event end and we thought we’ve got to keep this going for the community,” Robby Armstrong said.

According to Chimene, Hammond went back to the ladies of Las Damas and told them the Armstrongs had volunteered to help organize the event and that the Robby Armstrong Band would provide live music for it.

In previous years, the ball was held in a room at the Golden Sails Hotel in Long Beach. Las Damas would provide bus service for the firefighters and their dates. This year the event will be brought back to community as it will be held at Don The Beachcomber, within walking distance of many of the people who are expected to attend. In addition, the restaurant is donating use of the room for the event.

Chimene Armstrong said moving the venue had a two-fold purpose. It will save the money spent for bus service and keep the event close to the community.

“This is more economically efficient,” she said. “Don the Beachcomber is also a great place for it.”

Some popular portions of the event will remain the same. In addition to the live music and dancing there will still be the casino tables or gambling and a sumptuous silent auction.

“The ball has always been like the community’s prom every year,” Armstrong said. “Every year, community members of all ages come together and enjoy each other’s company.”

The Sunset Beach Firehouse Ball will be held from 8 p.m. to midnight. Tickets are $20 each and the proceeds will go toward the firehouse renovation. Don the Beachcomber is located at 16278 Pacific Coast Highway. For more information, call Chimene Armstrong at 714-813-3899.

Las Damas is a charitable nonprofit women’s organization founded May 8, 1948, by a group of women, most of who were young mothers interested in promoting education and social activities.  Their first project was a fashion show, held in one of the member’s homes; they charged 75 cents for the luncheon.

On July 10, 1948 Las Damas held the first Beachcomber’s festival, which is the forerunner of today’s Sunset Beach Art Festival.  The money they made was donated to a community fund, which was used to purchase the property on which the Sunset Beach Fire Station and the Community Center stand today.

Through the years, Las Damas has also sponsored the Brownies and Girl Scouts, AFS, Dollars for Scholars, rummage sales,Easter parties, and an Olympic athlete. In 1964, they published their first cookbook. In 1976, they made their first of 32 quilts. In 1982, they incorporated as a nonprofit organization.

Among other charity endeavors, the club also provides scholarships for those in the community heading to college and donate funds to the local schools for their arts programs.

Membership is limited to 75 active members. Membership is open to women who live in Sunset Beach, Surfside, and surrounding areas.