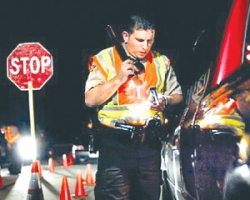 One drunk driver was arrested during last week’s DUI checkpoint at 1st Street and Pacific Coast Highway in Seal Beach.

Statewide, overall traffic deaths declined by 23 percent, from 3,995 in 2007 to 3,081 in 2009, according to the police statement that announced the checkpoint last week.

Total traffic fatalities are at their lowest levels in six decades, when the federal government began compiling figures.  DUI deaths declined by 16 percent, from 1,132 in 2007 to 950 in 2009.

Alcohol impaired deaths still make up the largest category of overall vehicle fatalities, with 31 percent of all deaths caused by a drunk driver.

Friday’s checkpoint was paid for with a grant from the California Office of Traffic Safety, through the National Highway Traffic Safety Administration.

Warm weather and mild surf resulted in mild beach activity during the week of Thursday, July 21 to Thursday, July 28, according to Joe Bailey, chief of the Seal Beach Marine Safety (Lifeguard) Department.

“The big action was the two lifeguard competitions that were held on the beach,” Bailey wrote.  The competition was held last weekend,” he wrote.

Petty Theft—9:17 a.m.—1st Street—A bike chained to the stairwell was taken during the night. The bike was described as a green beach cruiser for men valued at approximately $400. No suspect information. Report taken.

The bike was taken from the back of a pick up truck that was parked in the driveway. Report taken.

Suspicious Person—6:01 p.m.—Ocean Avenue—The caller said four or five young men were loitering near vehicles in the parking lot. They left on skateboards when the caller came close. The caller thought they might have been casing for the purpose of burglarizing cars.

Vandalism Reported—4:47 p.m.—Bolsa Avenue—The caller, relaying second hand information, said several teenagers were on playground equipment, trying to break it. They were stomping on the equipment. However, according to police unit 107 they were only playing on the equipment. No further police services were necessary.

Possible DUI—6:30 p.m.—16th Street and Pacific Coast Highway—An individual named Robert Leisher, born June 2, 1960, was arrested for DUI as a result of this call. The vehicle was legally parked.

Disturbance, Noise—11:14 a.m.—5th Street—The caller complained about an individual sanding glass bottles off and on for over a month. The caller said the sanding was extremely noisy. Police unit 107 contacted the individual who was sanding the bottles. The individual turns wine bottles into lamps. Police unit 107 determined there was no crime of any type. However, the lamp maker agreed to stop sanding bottles for the day.

Graffiti—4:31 p.m.—5th Street and Marina Drive—The caller, relaying second hand information from her grandson, said a juvenile with a marker was vandalizing property. Police arrested a juvenile for vandalism. The arresting officer asked dispatch to have the Los Angeles Sheriff’s Department attempt to contact the juvenile suspect’s mother. Arrested.

Welfare Check—6:27 p.m.—Katella Avenue and Reagan Street—The caller reported a woman shaking a baby and dancing around. The suspect was a white female with red hair, wearing all black and holding a backpack. The woman set the baby on the ground. The caller offered to keep an eye on the woman until the police arrived. The caller said the woman appeared to be under the influence. Responding officers contacted the woman and requested assistance from the Orange County Fire Authority. A 9-day-old baby with visible injuries was transported to UCI Medical Center. The woman was transported to Los Alamitos Medical Center for psychiatric evaluation. She was later arrested for child neglect.

Bees—10:54 a.m.—Green Avenue—The caller reported a large swarm of bees in a tree. The caller was concerned for children playing nearby. The caller said the bees are on private property and that a beekeeper should be called.

Traffic Hazard—6:07 p.m.—Bloomfield Street and Ball Road—A black Mazda van ran out of gas in the right turn lane from eastbound Ball to southbound Bloomfied. The driver returned with gas, started the vehicle and moved it out of the road.

Possible Drug Activity—3:22 p.m.—Snark Street—The caller believed an individual waiting outside the residence was expecting a drug dealer. The suspect was described as a white male in his 20s, 5 feet 4 inches, with a thick build, wearing a dark shirt and carrying a black backpack.

Disturbance—1:37 a.m.—Howard Avenue—The caller complained about people yelling and laughing in the alley to the rear. The caller then reported one individual in dark clothing running towards Farquhar. Another caller said two individuals were hiding in the bushes from the police. They were arrested.

Suspicious Person or Circumstances—12:13 p.m.—Christy Lane—The caller requested a patrol check for a man the caller considered suspicious. The man might have been a repairman, but the caller didn’t see a related vehicle. The man had been standing to the right of the caller’s location for 15 minutes.

Suspicious Person or Circumstances—9:26 a.m.—N. Pacific Avenue and Warner Avenue—A man described as a transient was reported walking around behind the Jack in the Box, possibly looking for keys in the wheel wells of parked vehicles. The suspect was described as a white man, 50 to 60 years old, 5 feet 8 to 9 inches tall, heavy, with a white beard and wearing a royal blue sweater.

Disturbance—12:14 a.m.—23rd Street—The caller said her drunk friend was outside, breaking his guitar because he was upset over her kicking him out.

Suspicious Person or Circumstances—6:05 p.m.—Pacific Coast Highway—The caller, a customer, said customers were at the business but no employees. The caller requested a walk thru of the business.