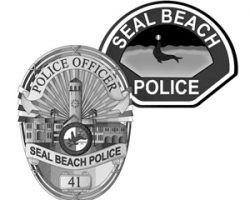 A bicyclist is currently being treated for head trauma after a motorist slammed into the bike at 60 m.p.h. on Friday, April 1, according to the Seal Beach Police Department.

Sgt. Steve Bowles, public information officer for the SBPD, said the victim was critical, but stable, as of 12:40 p.m., Monday, April 4.

The following is the police account of the event.

Early Friday afternoon, the bike rider was in the Westminster Avenue bike lane, east of Bolsa Chica. The bicyclist was travel ingeastbound when a Chevrolet  truck swerved into the bike lane.

The Chevy was apparently traveling at 60 m.p.h.

The bicyclist was thrown onto the dirt shoulder of the road.

Someone called the Seal Beach Police Department at 1:34 p.m.

An unspecified number of witnesses reportedly told police that the driver kept on going.

The driver apparently continued going east on Westminster Avenue, then went south on Bolsa Chica until he arrived at a home in Huntington Beach.

Seal  Beach Police arrested a man they believe to be the driver of the Chevrolet truck.

The man was identified by the Seal Beach Police as John Hines, 38 years old, a resident of Huntington Beach.

Hines’ name is not listed as a being in custody at the Orange County Sheriff’s Department Web site.

Bike Theft—4:21 p.m.—Seal Beach Boulevard—Someone took the caller’s bicycle between 9 a.m. and the time of the call to police. The bike was described as a two-tone teal blue/brown Beachcruiser with three baskets valued at $400. Report taken.

Petty Theft—6:49 a.m.—Seal Beach Boulevard—An individual was arrested for petty theft at a business. It turned out he was wanted on an outstanding warrant.

Defraud Innkeeper—1:26 a.m.—Seal Beach Boulevard and Electric Avenue—A cab driver reported that a man did not pay his taxi fare. (A cab driver is obviously not an innkeeper, but the section of the California Penal Code that applies to cheating a cabbie is called “defrauding an Innkeeper.”) Police arrested the man for public drunkenness.

Suspicious Person—7:08 p.m.—Pine Street—The caller said a dark-complexioned man unknown to the area sitting at the benches using a computer for over an hour. The responding officer found an individual using a computer. He left the park.

Disturbance—1:28 a.m.—Chestnut Street—A group of men and women were seen arguing in front of a restaurant. No weapons were seen. The group headed towards Sausalito with two men in a verbal dispute and a couple dozen onlookers. The group entered an apartment complex. Responding officers found 10 to 15 individuals who agreed to disperse.

Family Disturbance—11:06 a.m.—Paseo Bonita—Verbal argument between the caller and the caller’s grandson over the latter being kicked out of Saturday school. The grandson, a minor, reportedly spat on the grandfather. Juvenile’s parents were present. The juvenile left on a bike, traveling northbound. Everyone was counseled.

Disturbance—1:26 p.m.—Katella Avenue—A business was holding a grand opening with a disc jockey. The caller asked for the music to be turned down without effect. The caller was concerned about the scheduled 2 p.m. church service. The person responsible for the event was advised to lower the volumeand promise to comply with police instructions.

Person Down—9:03 p.m.—Los Alamitos Bouelvard—A man was seen laying next to an older vehicle to the rear of the property. The caller said the man looked unconscious, but did not look like a transient. Orange County Fire Authority was en route. The responding officer found a man who was able to stand. He was transported home.

Suspicious Occupied Vehicle—3:27 a.m.—Paseo Bonita—The caller observed a white Ford Explorer occupied by juveniles smoking for the past hour and a half. The juveniles were advised and released to their parents. The vehicle was legally parked.

Person Down—7:44 a.m.—Briggeman Drive and Los Alamitos Boulevard—A juvenile fell off a skateboard, onto his back. He was counseled.

Welfare Check—10:24 p.m.—Martha Ann Drive—An argument between a divorced couple prompted a check on the welfare of their teenage son. Nothing suspicious noted.

Citizen Assist—1:33 p.m.—Wembley Road—The call concerned the victim paying for work that was never performed. No report, No further details were available.

Suspicious Person or Circumstances—7:25 p.m.—Los Alamitos Boulevard—A suspicious person reported at The Fish Co.  The suspect was gone by the time the unit arrived.

Assault Report—7:25 p.m.—Foster Road—Two “pre-teen” sisters were involved in a fight.  No report requested. The matter was handled privately.

Disturbance, Music or Party—12:14 a.m.—Ruth Elaine Drive—A loud party was reported in the area. The party goers were advised to quiet down and complied.

The individual left prior to deputies’ arrival.