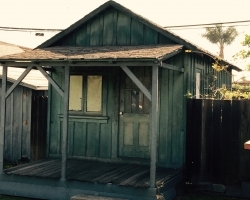 The City Council voted unanimously Thursday night, July 2, to accept a 115-year-old beach cottage as a donation to the city. The council also voted to approve funding related to relocating the cottage next to the Red Car Museum in the Founders Square area of the Greenbelt and to the cottage’s renovation. The Seal Beach Host Lions have pledged to raise money for the restoration of the historic 115-year-old building, believed to be the last beach cottage in the city.

Some critics of the proposal argued that the city should take more time to consider the location of the cottage. They argued that the specific plan for the Greenbelt would not allow the addition of the cottage without a series of hearings before the Planning Commission and the City Council. The possibility was raised that a California Coastal Commission permit would be required.

The city attorney argued that the specific plan allows for improvements and that relocated the small structure, which will not be inhabited, does not require a coastal permit.

Some individuals asked about the costs to the city. The owners of the house gave the building to the city. According to city staff, the costs are associated with relocating and renovating the building. The city manager said there was money in the budget available to cover the relocation cost.

According to city staff, the Melanie and Don Blayney family gave the cottage to the city on the condition it be removed in 30 days. The Blayneys want to build a new home on 12th Street, where the cottage is currently located, and have already obtained a permit from the Coastal Commission to demolish the building.