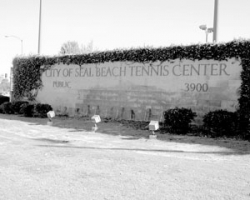 Seal Beach has a contract with a new tennis professional to run the city’s Tennis Center.

The City Council unanimously approved the contract with Brenda Danielson to provide tennis professional services to the center on Monday night, July 14. The agreement was a Consent Calendar item. Consent Calendar items are voted on collectively without council discussion.

Danielson has been hired as an independent contractor, not a city employee.

Danielson offered to answer council members’ questions, but none of the council reps had questions for the Tennis Center’s new hire.

Danielson was one of four tennis professionals who responded to a request for proposals, according to a staff report prepared by Seal Beach Recreation Manager Tim Kelsey.

According to Kelsey’s report, Danielson has more than 20 years of experience.

The job appears to be managerial.

“It is desirable that the tennis professional has experience as a manager at other tennis facilities,” said the city’s original request for proposals in 2013.

According to the agreement, Seal Beach will pay Danielson $3,600 per month as a base compensation, as well as 65 percent of the registration fees for Tennis Center classes, less $5 for each participant; 80 percent of revenue collected for all and activities and 90 percent of the revenue generated by the pro shop and vendor contracts.

“With the adoption of this agreement, Brenda is prepared to immediately start working on the City’s behalf to grow programs, increase participation, and make the Seal Beach Tennis Center a destination for residents and tennis players across Southern California,” Kelsey wrote.

According to Kelsey’s report, in 2013 the City Council directed staff to implement the Tennis Center Strategic Plan and some of the goals spelled out in that plan needed to be carried out by tennis professional. According to the contract, goals for the center will also expanding tennis programs and having at least one tournament per quarter.

According to the “Seal Beach Tennis Center Action Plan for 2020,” by Kevin J. McArdle Consulting, priorities for the 2014-15 Fiscal Year will include rolling out an extensive marketing program for the center and increasing membership.

A survey conducted by Richard Fisher Associates for the Seal Beach’s 2013 Parks and Community Services Master Plan estimated that about 9 percent of the city’s residents have ever used the Tennis Center.