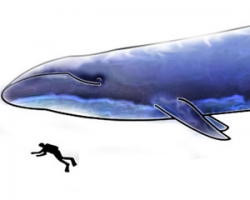 During the heyday of the whaling industry the giant blue whale population faired better than most species.

The leviathans are faster than most of their cousins in the whale species and whalers found them too difficult to hunt, especially when there was easier prey to be had.

However, the whale hunters were relentless and the blue whale population slipped to where they were considered endangered.

Although endangered like most of the whale population, due to over hunting by man over the last few centuries, the blue whale seems to be making a comeback and thriving off the coast of Long Beach and Catalina Island.

Record numbers of the sea creatures that are the largest animals to ever exist on our planet have been seen gathering in the local ocean waters.

Their appearance has Orange County and Long Beach whale watching tour businesses scrambling to present the whales to their customers and their cameras as they try to document the wonder of seeing these whales in the wild.

Meanwhile, tourists coming across the channel on boats such as Catalina Express have had the pleasure of viewing the giant of the ocean as captains have stopped the boats to let the creatures pass by safely.

Many species, including blue whales, are regular visitors to the waters between Catalina and the mainland. However, blue whale sightings have become more common over the past decade and this year blue whales seem to be teeming in our local waters.

A blue whale would be crushed by its own weight without the support of large heavy bones if it lived on land. Because its body is supported by water, it doesn’t need heavy bones to support its weight. The addition of a large food supply has made it possible for the blue whale to reach such an enormous size.

Blue whales primarily eat krill (a small shrimp-like animal). Their baleen is black.  Depending on the size of the whale, they can have 260 to 400 plates of baleen on each side of the mouth.

Blue whales, known by their scientific name as Balaenoptera musculus, can grow up to about 27 meters (90 feet) long.

Like other baleen whales, the females are a little larger than the males.

The blue whale makes sounds that can be felt as well as heard and they can communicate with others of its species hundreds of miles away.

Blue whales have been hunted throughout history for their baleen and blubber, but they are now protected from hunting by various laws.  It is estimated the current world population is 9,000.