Aunt Gertie sat down with Colvin English, to learn about the concept for Jennings & Allen and all the beautiful gifts from around the world. After we talked he presented me with a gift bag filled with a delightful jar of Lavender Salve. My hands loved it and the aroma was delicious!

Steven met Colvin in 2003, on the adult swim team and they hit it off famously. Both of these nice men had a dream of having a unique store based on eco-friendly, sustainable hand-made, crafts and gifts and found the perfect little nook behind Brita’s Old Town Gardens. With Colvin’s extensive background in the import/export industry and connections to artisans around the globe, they made it happen and now have a bustling, successful business. Do you think one of the artisans could make a sustainable cigar for Aunt Gertie?

Colvin English was born in Texas and raised in Virginia. He went to elementary and high school in Fredericksburg, graduating in 1987. He received a degree in Business Management from Virginia Tech in 1990. His father was a military man and mom was a school teacher. Colvin’s family had a wood carving business which he sold in 1997 to come out west.

Steven Armijo was born and raised in San Pedro, graduating high school in 1988. He attended Cal State Dominguez and then received a Masters in Social Work from USC in 2011. His father was a pipe fitter and mom worked at the cannery. Steven is very proud of his Native American ancestry. 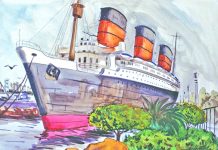