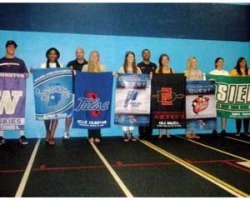 People who attended the inaugural Champion’s QUEST’s College Athlete Night said it was a huge success.

There were 12 senior athletes from the Champion’s QUEST Athlete Academy that earned spots on college rosters by committing themselves to years of training and dedication.

Their excited families joined us to celebrate this moment as well as their hard work and dedication. Listed below are the Champion’s QUEST athletes:

“ It was great to see all the smiles on the athletes and parents faces,” said Ryan Bishel, Director of Athlete Recruiting, “The fact that my staff and I can help make such a difference in these athletes lives is a true joy!” “We already have two classes of 2011 athletes committed to teams and more on the way.”

Champion’s QUEST is the premiere Varsity and College Prep Athlete Academy dedicated exclusively to student athletes. They an be reached at (562)598-2600 or www/ChampionsQUEST.com