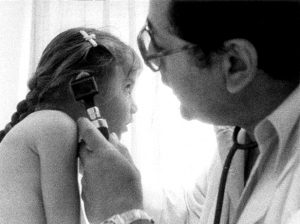 Dr. Anthony Sotelo had a passion for medicine that never wavered. No subject held his attention like medicine. General Practice was the best place for him. He was practicing at the right time, before there were paramedics or urgent cares or electronic records or all the incumbrances modern physicians now have to contend with.

He delivered babies, did surgery, set bones, and diagnosed illnesses. Anything that was serious enough to be in an emergency room he handled. This experience set the stage for his “wickedly good diagnostic skills,” his wife Brita Lemmon said “I often found it spooky how he knew just by looking,” Brita said.

He would say ‘Let the patient talk, they will tell you what’s wrong with them.’ He listened, he looked and if he didn’t know right away, he knew how to find out. He was practicing before much of the diagnostic test we now have available were even thought of. A doctor’s clinical judgment was paramount.

He started a private practice in Seal Beach on March 1, 1972. He and a partner built out the reception room, front office, a bathroom, two rooms for exams – pediatric and general. His partner hired Winona Gustafson. Winona was told to be at the office on the 1st at 9 a.m. but no one was there. She got entrance through the library (the rest of the building was still the old library). Tony came a little later. She asked can I help you and he said I’m Dr. Sotelo.

“I think he was coming from a ski trip, his hair was in a large afro style and didn’t look much like a doctor. They hadn’t met yet,” Brita said.

The partner never came to work. He decided to become a plastic surgeon. However, the practice was born.  Office calls were $5 and he took Medi-Cal and Medicare insurance.

Dr. Sotelo was the Seal Beach Police surgeon, took care of all firemen, police and Fish and Game officers’ physicals. Being two blocks from the beach there were stingray bites, fishing hooks in fingers, extreme sunburns, glass in feet, and they all found their way to him. As the town evolved from the wild west to families so did the practice. The library moved to the Greenbelt.  Doctor Sotelo added two new exam rooms and a surgery room.  He finally got an office with a door. The old pediatric room became the lab and so it has stayed for 47 years.

There were some exceptional adventures that came through that front door. A patient from Lakewood who drove himself to the office after using his circular saw on a piece of wood he had on his lap, yes the inevitable happened. Too embarrassed, he didn’t ask anyone to take him. Instead he trusted Dr. Sotelo to take care of it and drove himself.

Winona and Dr. Sotelo were a really good team. The patient wasn’t sure he wanted her in there, but was quickly convinced they were both necessary. Dr. Sotelo stopped the bleeding, sutured him up and they called for an ambulance.

The last baby Dr. Sotelo delivered was in his office. The young girl was brought in by her boyfriend. She wasn’t feeling well they were both part of a rock band that was on a tour stop in the area. When Dr. Sotelo recognized she was having a baby, she said she didn’t know she was pregnant. Winona sent all the other patients’ home and they delivered a breach baby without complications. Then an ambulance was called.

“For years after that, the father sent Winona flowers and Doctor Sotelo a bottle of wine on the boy’s birthday,” Brita said.

One of Doctor Sotelo’s most beloved gifts was that of homemade food. Throughout the years he received shells and sauce, pickles, cookies, pies, and so many specialties of patient’s national dishes and he was always truly thankful.

“Food was love and it spoke to him,” Brita said.

Winona worked for 33 years. She had hoped they would retire at the same time but in the end, she was needed at home and he just wasn’t even thinking of retirement at that point. Julie Santos finally came in and filled the void. She too retired and he wasn’t ready. The office has had many wonderful people handling the front desk.

“I took my turn for nine years, Renee, Lesley, Nancy and on the home stretch Sue,” Brita said.

Dr. Anthony Sotelo always spoke of his practice as being really special. If he needed to know something, outside of medicine, he would quiz the patients or call whomever he knew that it was their specialty.

“It was better than Google,” Brita said.

He loved to barter, trade, exchange – life was fun. And he never wanted his practice to end. In the end, Dr. Sotelo worked almost until the day he passed. He was 90 years old. It was his life. It was his passion. It was his calling and he left behind a legacy entrenched by his work in the community, with his patients and with his friends.

“Everyone was his friend, and many became his best friends,” Brita said.